Hello!
Thank you very much for accepting our request! It’s an honor
for us to talk with you!
You will play a concert in Poland on 16 march. How many times during
your career did you visit our country?
Greetings! I am equally honored.
Indeed we will, it’s in a couple days now actually! Looking forward to it alot, it’s been a while since we played Poland and it’s always killer!
I cant recall exactly how many times we’ve played in Poland but it’s been a few, and theyre always killer! First time i believe was in 92 perhaps.

In 1996 you released the album „Eastern Blood-Hail to Poland,” which
included, among show recorded in Katowice. Why Poland has earned such
a distinction? By the way- what do you think about this DVD? It was a
good concert for the DVD?
Yeah for sure we did! It was just a good show and the polish crowd have always been known to us to be a great audience and did not disappoint! It would have been perfect for a DVD but as far as i know that show was not filmed. But if it was i’d love to see it!
This year has just begun .. Do you have maybe any special plans for this year?
There is some plans. Of course we’ll do as many festivals during the summer but also there is a European tour imn the works for the autumn as well.
„Odalheim” is a story about warriors of Midgard who survived
Ragnarök and maintain their traditions in the new world. Wow, where
the idea of such an exotic topic?
It is indeed a big lyrical project and has been something Johnny has been working on in his twisted head for quite some time.
The eleventh album in your discography, the next step up. It seems
to me that evolve in a way perfect, do not you think? 🙂 By the way-
can you confirm the speculation that „Odalheim” is a continuation of
„As Yggdrasil Trembles”?
First off, yeah it is totally a continuation of „Yggdrasil”!
And good to hear your thoughts on the evolution! It’s exactly how we feel, and what we try to do! It’s a matter of taking your style and naturally try to evolve within that and taking it one step further on every album.
Are there limits of topics lyrics? Is there such areas, which you do
not want to move?
I dont think we’ve really thought in those terms. In a way there’s definately no limit or boundaries of what to write about in general, but of course we as with the music have our style and try to evolve within that.
It is worth noting that in the „Odalheim” are also fragments of an
acoustic guitar, what is something new (at least I didn’t hear it).
Yeah there’s been some parts mixed in, more as intro’s/outro’s to try to create a mood, or flow if you will. Something i’m sure will done in the future as well.
What are you doing, to have such a great voice? Not only a tone of
voice, but clarity! Do you train also a melodic vocal?
Well it’s not Johnny answering this interview haha, but he has always wanted to sing with a style that is both agressive and „death metal” so to speak, but at the same time wants the lyrics to be heard. But i think i´his training consists mostly of screaming while walking in the woods.
It is the year 2013, I know that „Odalheim” released very recently,
but your career has pace! So I ask, do you have already formed plans,
and maybe even ideas for the new album?
We are always writing new material, so there are for sure plans and ideas for the next album. Both musical and lyrical.
You play so many years … A form of musical function without
charges. The question is what about the mental and physical form, what
are your relation to others and each others to the band music?
Yeah it been going on for quite some time now haha…
It’s hard to say nowadays really. It’s totally second nature like a weird dysfunctional family!
I’ve read somewhere once that you do not feel stress before
performances. Well a surprising number of years on the stage and the
mass of experience, the countless number of fans, it’s all can add a
self-confidence. But whether your experience didn’t take away the
pleasure of playing on stage? You treat a concert as a thrilling clash
with the audience, or rather more as work?
Well thats true. Of course sometimes there can be stress, but it’s more stress when things are not working or organization is not working. But we’ve been doing it so long that we’re very seldom nervous to play. But for certain every show is as you put it a thrilling clash with the audience! Very well said!
It’s never like just work. Playing live is what this band has always been about!
Death metal music, like any other, has no limits. It does not matter
where it comes from band- it’s important what presents. However, is
the truth, Scandinavia is known for the solid metal. But is there such
a thing as-scandinavia vs. the rest of the world?
I’m not sure. I guess that would be for someone on the outside to say. As for us, we’re generally not vs anyone. We do our thing and dont really care to compete with other bands or styles. 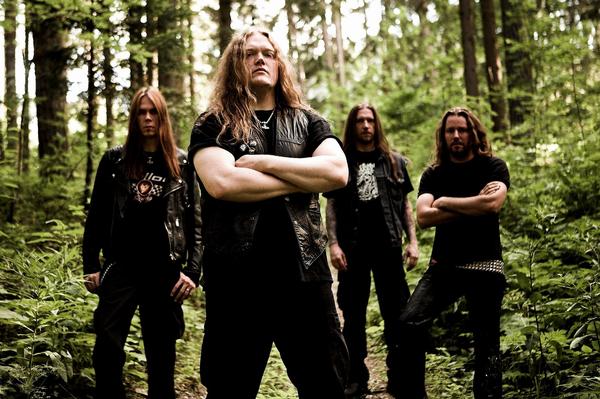 Taking into account (I go back again to this, ahhh …) number of
years in the music industry and the juxtaposition of this fact with
your discography, every listener can feel the impression that very
effectively uodporniliście on the evolution of music (this kind of
music, that goes in the wrong direction).Do you use something like a
super vaccine? 🙂
Yeah….beer haha! No really sometimes we think of this ourselves…how we’re actually still doing this, and still with fire in our hearts! We never find the answer.
It’s just something we have to do, no matter what the opposition, we have to. And fortunately, it seems to work, the energy is still there. Almost more than before!
From the outset I must admit that you created the prefect band. I’ve
noted almost lack of the changes in the band. How looks the atmosphere
between you today, after so many years of playing together?
It’s actually better now that we’re old and jaded haha! We did use to figth alot more in the past but nowadays it’s pretty smooth. We generally have a great time when we get together.
Brutal death metal + melody. In the adhesiveness is the power? Is it
your recipe?
Well there needs to be melody and catchiness we’ve always felt. But at the same time it has to be agressive and brutal. Thats the perfect combo!
Thanks for taking the time for this interview! See you in Szczecin,
under the stage! Last word is yours. Hail!
Thanks! Look forward to the show!
Join the Battalion, hail Oden!